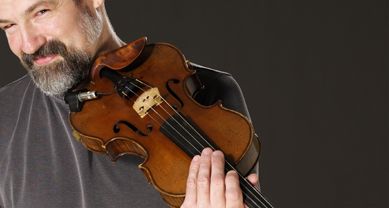 On this page you’ll find descriptions of Randal Harrison’s performance groups and individual bios for the artists who regularly perform with him. You can scroll down to the bottom of the page for Randal’s full biography - “the novella version”.

• Please, click on the “Clinician” and “Private Lessons” tabs in the navigation bar for more information on Education and Outreach offerings.

Freelance Artist. Here is a list of artists that have recently hired Randal as violinist/fiddler. You can go to the “Links” page to find their website’s listing of performances:

• available for concert and festival performances, clinics, artist in residencies.

Randal Harrison: The New String Trio is this Emmy nominated composer and jazz violinist's latest venture. The New String Trio features Matt Turner, regarded as one of the world's leading improvising cellists, and Mark Urness, winner of the prestigious International Society of Bassists Jazz Competition. The group may have classical instrumentation, but they aren't at all exclusive or stuffy. From Bo Diddley to Billie Holiday - Jimi Hendrix to Astor Piazzolla, Harrison's arrangements and original compositions are fresh and meaty. The New String Trio's charisma and virtuosity inspire audiences of any genre!

• available for concert and festival performances, clinics, artist in residencies.

An eclectic journey through musical cultures of the world!

Randal Harrison, violinist, Emmy nominated composer, MAMAs Classical, Jazz and Blues Artist of the Year and Stas Venglevski, a Graduate of the Russian Academy of Music, three time winner of the Bayan Competition of Moldova, first met International bodhranist Evan Leahy while performing together in his WAMI winning Celtic band, Leahy’s Luck.  After touring and playing together for years, 2011 marks the inauguration of these three virtuosi as the independent trio, Bodhinay`.  Their performances are a musical travelogue, bringing together a far reaching mix of Celtic, Tango, Gypsy, Americana and World Music.

• available for concert and festival performances.